A simple but very satisfying dish, a winner with the kids and one of that I did actually manage to contain myself in not got back for more that night, so that’s something, more than can be said for the bars and bombs!
I just adore the scent and taste of this spice it really is wonderous and its diversity means its not only smashing with all kinds of potato dishes but goes with most other foods as well.
When cooking with Saffron it releases a beautiful golden colour that instantly sticks to any other foods that allow it, making dishes become beautifully vibrant.
It may be the most expensive spice in the world but its not that expensive actually, it lasts for quite some time unless you do literally use it for everyday use and it does bring much life to any dish. I’ve had comments made about the wonderful colours in my first shared Frittata mainly due to the Saffron used.
It’s also great in Tea too, it’s been recommended as an aid in mental health along with Calendula as its said to stimulate serotonin – although I am still yet to try them combined – I can say it does go nicely with Lavender, Rosemary and Rose Petals though. Its extremely nutritional and its high in vitamins, minerals, carbohydrates and proteins and is also a great and natural antioxidant.
Until recently I never even knew Saffron existed, well I guess I did but only through the distinct flavour it brings…I always wondered what that amazing spice was when indulging in an Indian meal, now I will never forget!
It’s harvested and then sold in a straw like form and when any liquid touches this spice it instantly releases the golden colour and deeply enticing aroma. I find its scent is comparable to none, it’s that different to any other scent out there and even just inhaling it makes me heal.

To spice up any Potato dish just simply add a pinch in when the Potatoes are cooking and there you have a homemade version of a Saffron Potato side dish.

I used Organic Charlotte New Potatoes from Jersey this time and after adding the Saffron, a little while before the end, I allowed them to cool and then added them to a salad and the waxy texture of the potatoes soaked up the spice perfectly bringing a makeover to the root veg.

For my method this time I used a little too much water too steam my tats and I added Coconut Oil which combined and turned into a thin Saffron and Coconut sauce rich in colour and health so I drizzled it over the Potatoes instead of a knob of butter and it tasted awesome! Being so very frugal and re-using everything I can the rest is bottled in the fridge for another dish.
Next time i think I’ll be a little more creative and add a few more ingredients to make a full on healthy potato sauce. 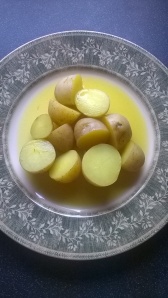 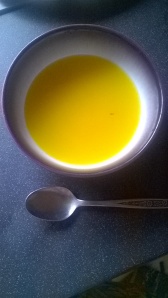 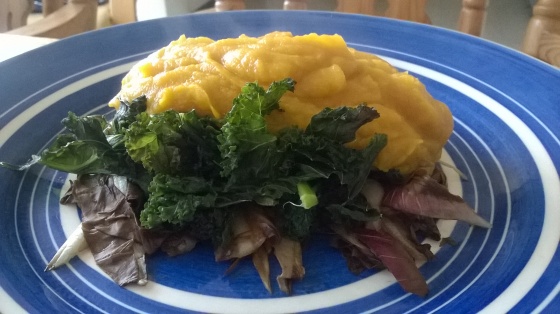